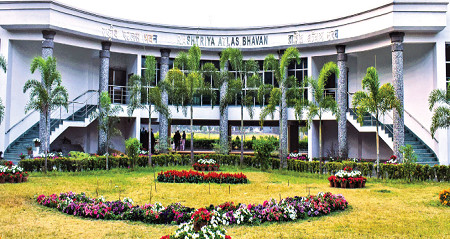 National Atlas and Thematic Mapping Organisation is a specialized institution of its kind in the world. This organization was assigned with responsibility in the field of thematic cartography and geographical research at national level. It has grown in size, activities, popularity and prestige since its inception and has established itself by making substantial contribution towards the nation’s effort for socio-economic revival.

A subordinate office under Department of Science & Technology, it is the sole authority for depicting National framework data in the form of thematic maps and atlases to cater the actual picture of the development and planning initiatives of the country among the users. Keeping pace with the modern state of the art technologies and also to achieve the goal as per its mission in the arena of geo-spatial technologies, NATMO has already progressed a lot.

The plan of compiling a National Atlas of India was formulated for the first time in this country by Prof. S.P.Chatterjee, the then Professor of Geography, Calcutta University. A discussion on this subject with late Pandit Jawaharlal Nehru in 1953 resulted in his instant approval of the project.

The Ministry of Natural Resources & Scientific Research after consultations with other Ministries decided to set up an Advisory Board in March 1954 for formulating a scheme for preparation of National Atlas of India. The Advisory Board gave a favourable report and also provided a tentative guideline about the scope and contents of the atlas. Subsequently in April 1954 the same Ministry sanctioned a skeleton staff of 7 posts on a temporary basis to help Professor S.P.Chatterjee in giving shape to the Board’s suggestions.

The small group of workers officially known as National Atlas Unit drafted maps on various topics for the proposed atlas. These were examined by different experts in Planning Commission and in the Ministries. The authorities were eventually impressed and convinced about the essentiality of the project and on August 18, 1956 an order from the Government of India issued by the Ministry of N.R. & S.R. sanctioned a budget grant of Rs. 12.43 lakhs for 1956-57 .

The first National Atlas of India in Hindi popularly known as Bharat Rashtriya Atlas having a 26 multi-colour maps with a scale of 1:5 million portraying a comprehensive physical and socio-cultural structure of the country was published in 1957 and was acclaimed the world over as a unique publication. Consequent upon the success of Bharat Rashtriya Atlas, the organization decided to prepare an ambitious project containing 300 plates which covered all the aspects of the land, people and economy of the country. This atlas was issued in 8 volumes. Apart from the above project, the organization also took up various projects either from outside agencies or its own.

The order also sanctioned creation of additional 56 temporary posts and Padma Bhusan Prof. S.P.Chatterjee was appointed as the Honorary Director of the Project. The institution thus created was named National Atlas Organization from that date. The Geography Department of the Calcutta University located at Senate House in those days provided the first shelter to the organization.

The organization grew in strength in the successive plan periods and took up projects of great national importance. The Government appointed a Review Committee in December 1975 under the Chairmanship of Prof. George Kurian and as per recommendation of the Committee, the Department of Science and Technology through an order dated 9th August 1978, modified the name of the Organization as “National Atlas and Thematic Mapping Organisation (NATMO)”.

The Organization is now engaged in scientific pursuits for thematic mapping at local, regional, national & international levels. It employs a large number of highly qualified professional geographers, perhaps largest, under one roof anywhere in the world.